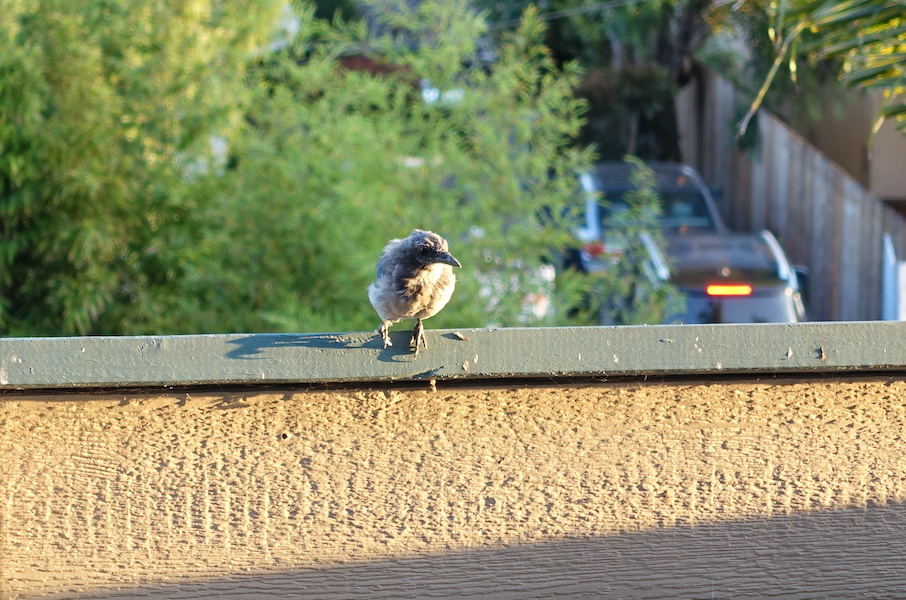 We first noticed Little Jay a few weeks ago because he appeared to be very young: he still had a lot of his down feathers and no tail feathers at all. He was super awkward around the feeder and the surrounding perches. That’s when we noticed he had a bum leg, probably broken. He never uses it, which makes it difficult to move around sometimes.

Most of the time he shows up to the bird feeder alone (which is not unusual for a Scrub Jay) but he does come by often, much more often than any other Jays. If another Jay shows up to the feeder while he is there, he let’s them eat first. Even if he’s not at the feeder we can usually spot him sitting on power line or perch somewhere close by.

We hope he has not become dependent on our feeder, but it is in our minds as a possibility. We are hopeful for him though, as his down seems to slowly disappearing and there is a hint of a tail feather starting to show. Maybe his leg will eventually heal.

While I had always intellectually known that many species of bird stick to a single territory including the California Towhees, House Finches and Morning Doves that often visit us, Little Jay made the idea instinctual. He is a reminder that we may live in this place and pay the rent, but it is not our home alone.