Too Far, Too Fast: Backpacking the Manzana Hurricane Deck Loop 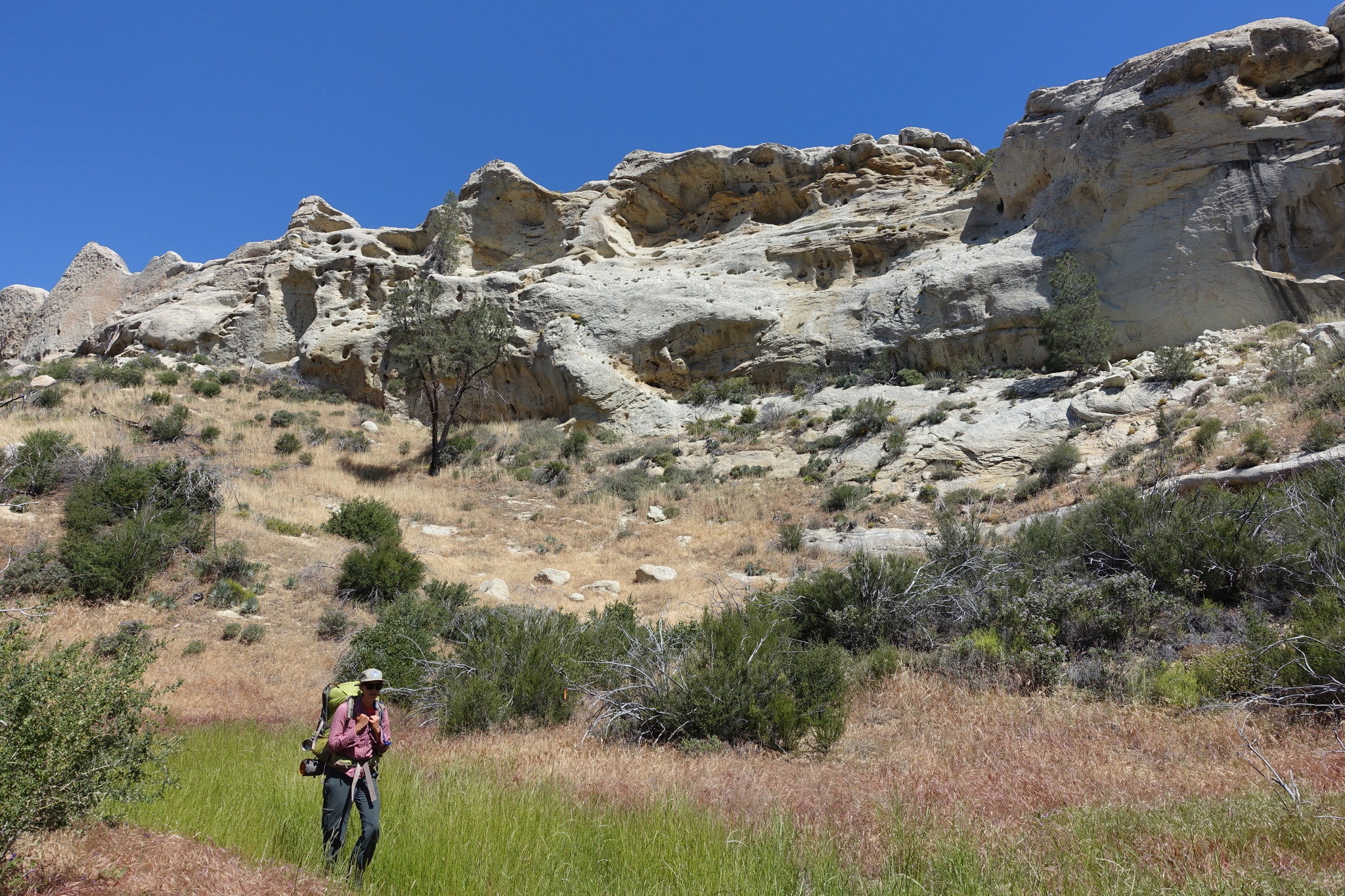 Labor day weekend, the official start of summer. Time to bust out that barbecue, unfurl that tent! While many people in America are celebrating the beginning of the outdoor season, some of us are squeezing in our last few adventures before the end of it. While not technically closed during the summer the Los Padres National Forest back country it not a place you generally want to be in the middle of July. Water is scarce to non-existent, temperatures hang around the triple digits and as someone once said: “the ground itself becomes a furnace”.

So when the forecast for the weekend showed mid 70s temperatures and even some cloud cover, Andrea and I took the opportunity to head out to the San Rafael Wilderness to give a few nights backpacking and a walk on the infamous Hurricane Deck a shot. 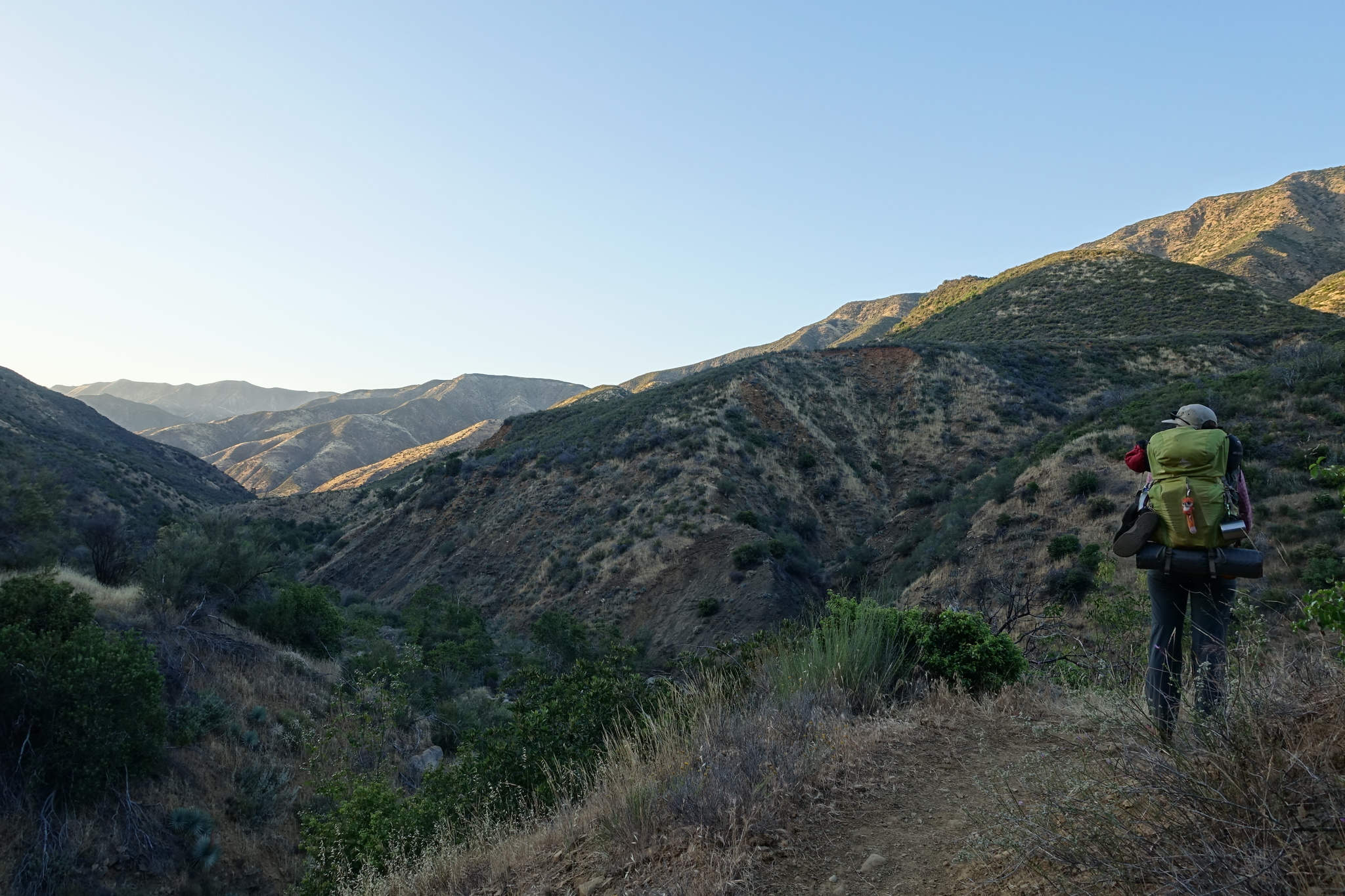 After a 1 1/2 hour drive from Goleta we arrived at Nira Campground around 4:30 on Friday. From herethe trail crosses the Manzana and within the first 100 feet we behold a beautiful site: water! And lots of it. Not just a stagnant trickle that you are happy to be able to filter to drink, but an actual decent flowing water; enough to swim in.

The trail meanders along and occasionally across the Manzana, through some choice campsites and up and down a few cliffs. The surrounding terrain was riparian/chaparral with the occasional pine tree standing proudly above the oaks. The smell of sage was strong in the clear air adrift with the sounds of Canyon Wrens and the excited chattering of the creek itself. The trail at this point is very well trodden and clear and at the time of this writing had recently undergone some maintenance. 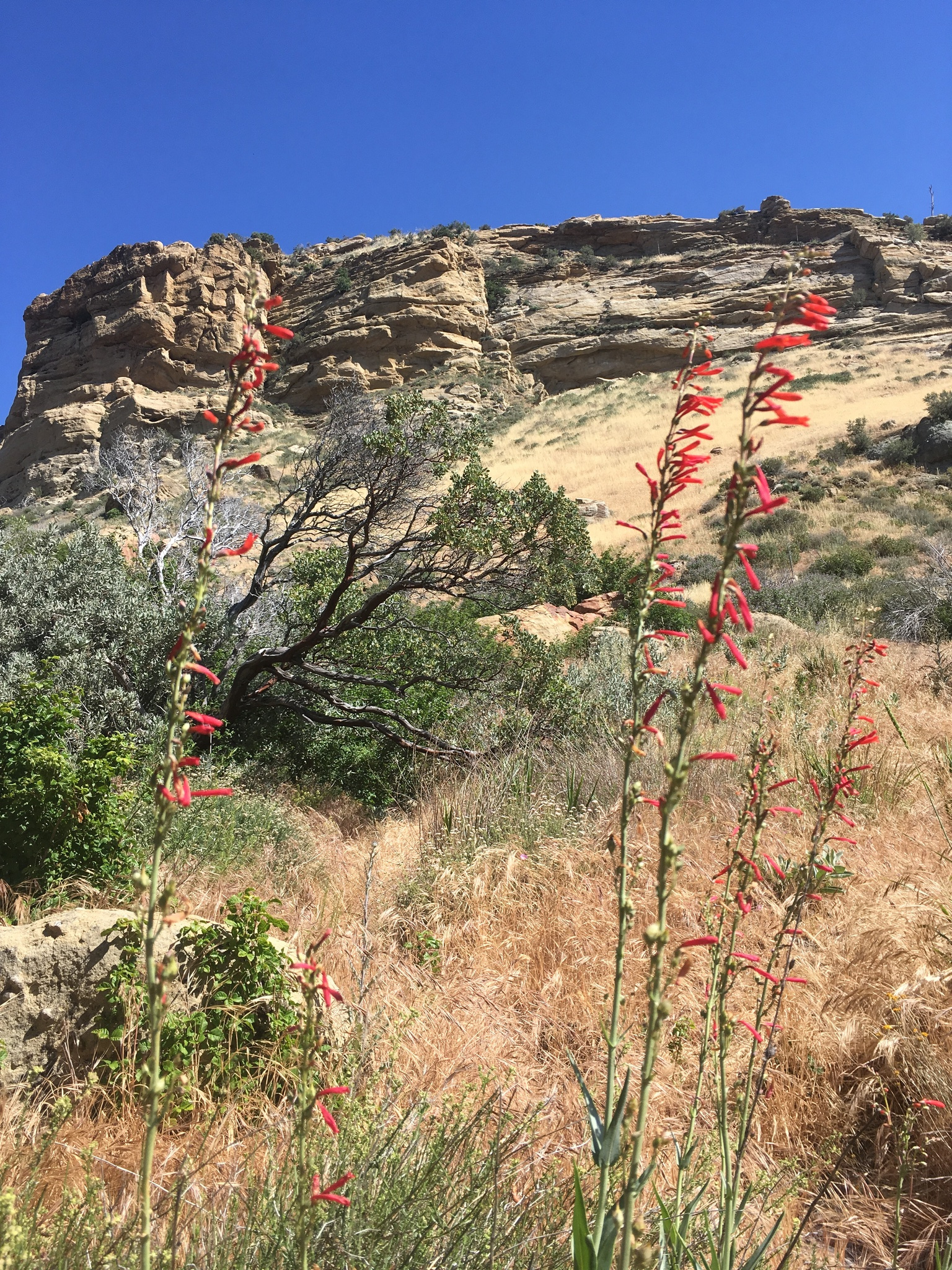 Shortly after passing Ray Camp the trail turns gently north and begins to climb a narrow valley. Here the creek makes the best use of elevation and treats you to waterfalls, pools, and fairy ponds. If you like to swim, this is your jam.

We reached our destination, Manzana Narrows just as dark was settling in. Here we unloaded our 5 pound burritos and engulfed them immediately. Our bellies content and our minds excited for the next day, we made our rest.

The next morning we awoke somewhat (but welcomely) late (thank you high canyon walls!) After some coffee and oatmeal we were off up the trail once again. 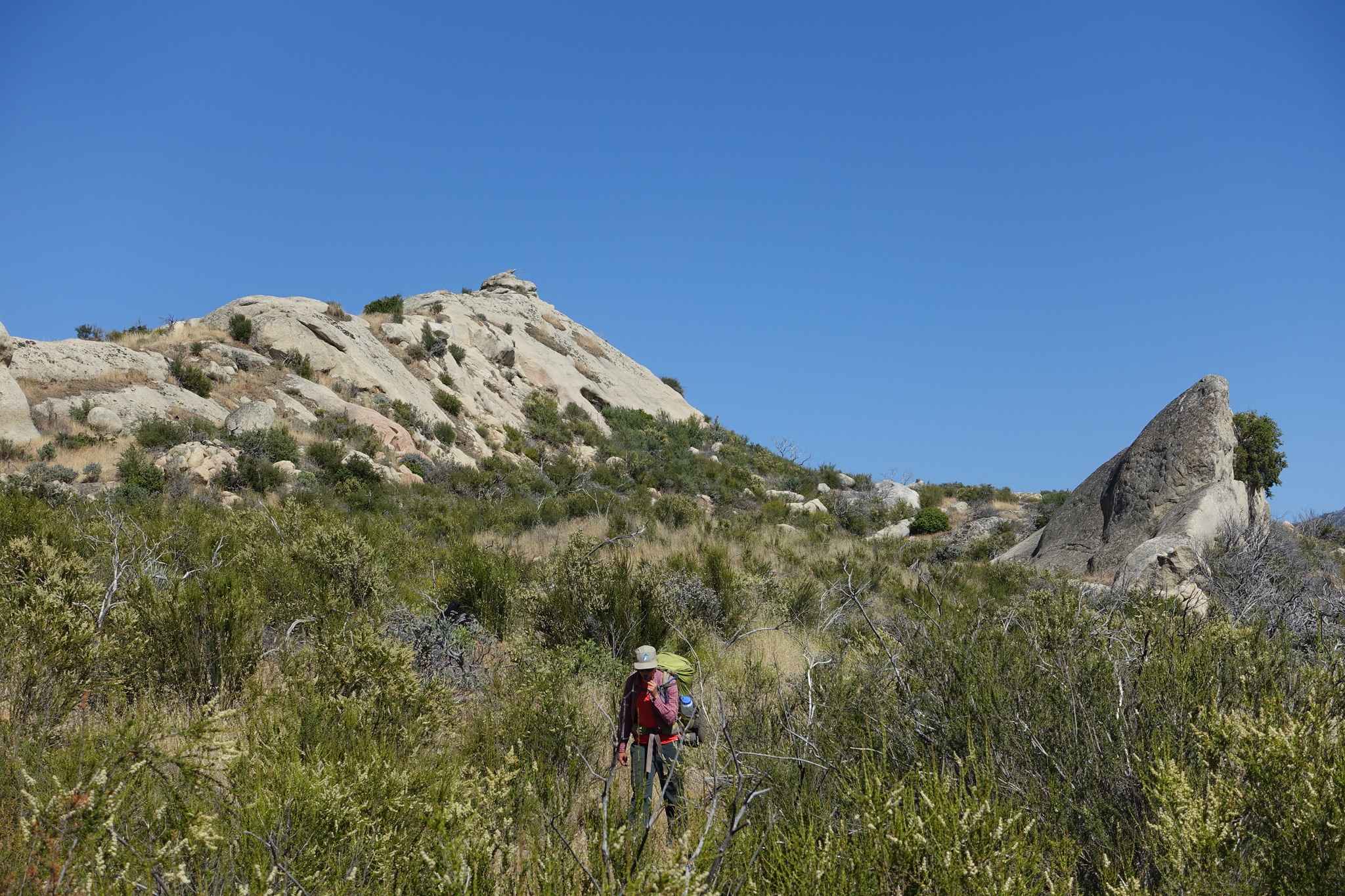 Almost immediately we were hit by a series of steep switchbacks out of the river canyon that made us grateful that the sun was not yet too strong at this time of day. At this point terrain changes rapidly: the riparian surroundings are completely replaced by foxtail meadows punctuated by the occasional oak tree. The sky here is is big, blue and wide: very few trees remain due to the Zaca fire which leveled the area in 2007. We crossed tiny tributaries lush with wildflowers and tadpoles and discovered a (secret) campsite complete with a running spring and a bedrock mortar.

The area’s most stunning feature however has to be the massive sandstone outcroppings and cliffs which ripple, bugle and pierce the landscape. They are pockmarked with holes and harbor caves large enough to sleep in. The textures of the rock vary between smooth gold sandstone to geometric reptilian patterns. One particular boulder looked like a stack of pancakes.

Eventually we made it to White Ledge Camp where we took a refreshing swim in one of the sandstone pools and refilled our water. We took a left and headed up Hurricane Deck. Here is where the second half of our journey began. 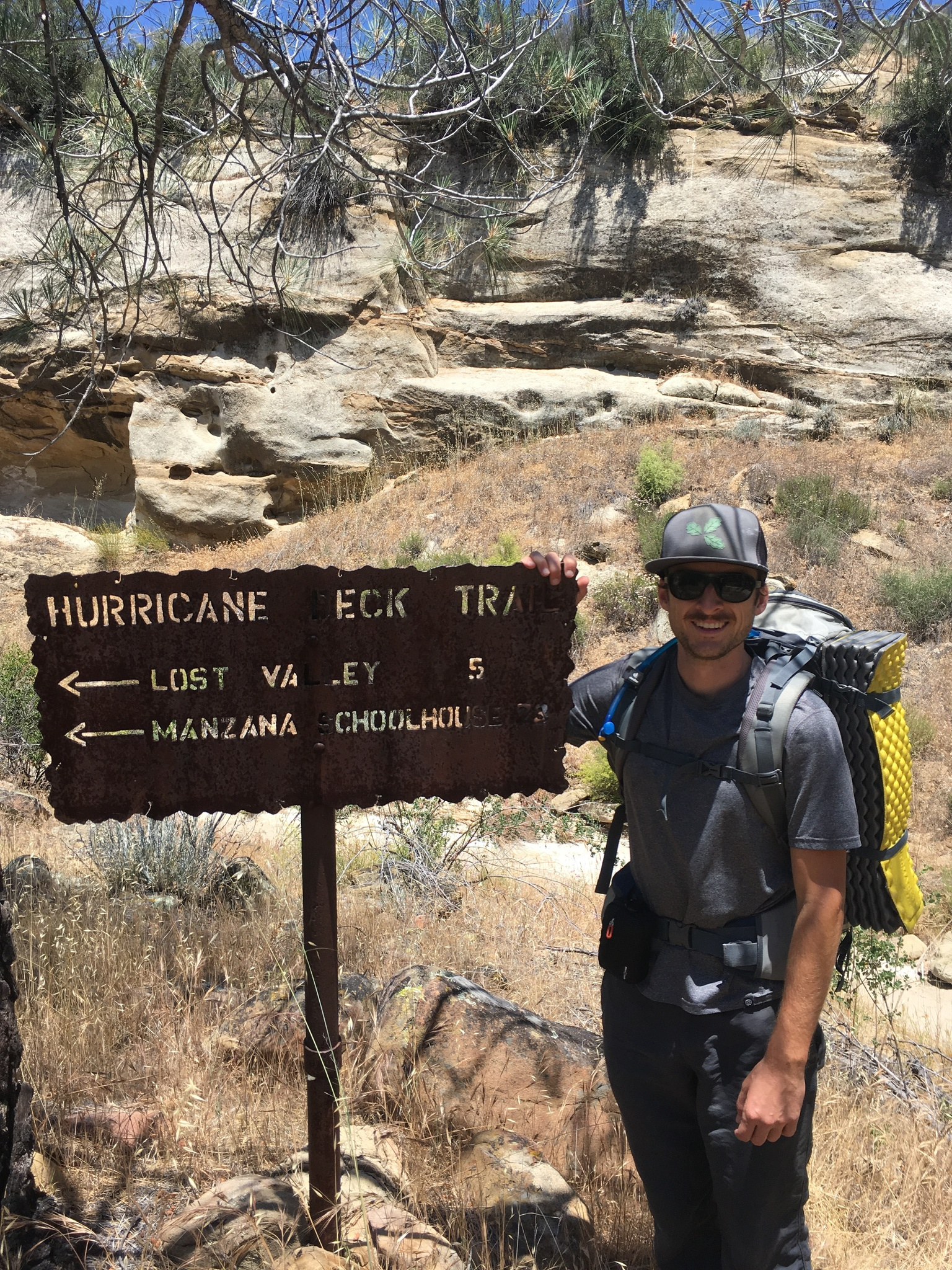 I’ve heard all the mythos surrounding Hurricane Deck: how it is overgrown, steep, exposed and full of rattlesnakes. So we were OK with the fact that we might not have the greatest time. The trail started out pretty faint and right away we lost it twice and had to backtrack. Not a confidence inspiring start. However, once you reach the edge of the deck (sort of like a ridge) it becomes nearly impossible to get lost. That doesn’t mean the trail is any easier, though. The chaparral get so thick in places we had to crouch down and push through with our arms and legs, un-snagging our packs and protecting our eyes from swinging twigs.

When the Deck opened up however, it was truly worth it. The 360° views of the San Rafael Wilderness were fantastic. A cool breeze drifted along the top gently buffeting wildflowers and butterflies. Most surprisingly: no rattlesnakes!

After five miles of pushing through Hurricane Deck we came to Lost Canyon trail which also shared the name of our camp for the night. At this point we had already hiked about 11 miles and were beginning to feel it. With just 4 miles to camp we began down the Lost Canyon trail, which is actually an old roadbed so quite wide in places, though severely overgrown so you wouldn’t notice. We made one stop at Vulture Springs, most likely aptly named due to the fact that it is barely a trickle. 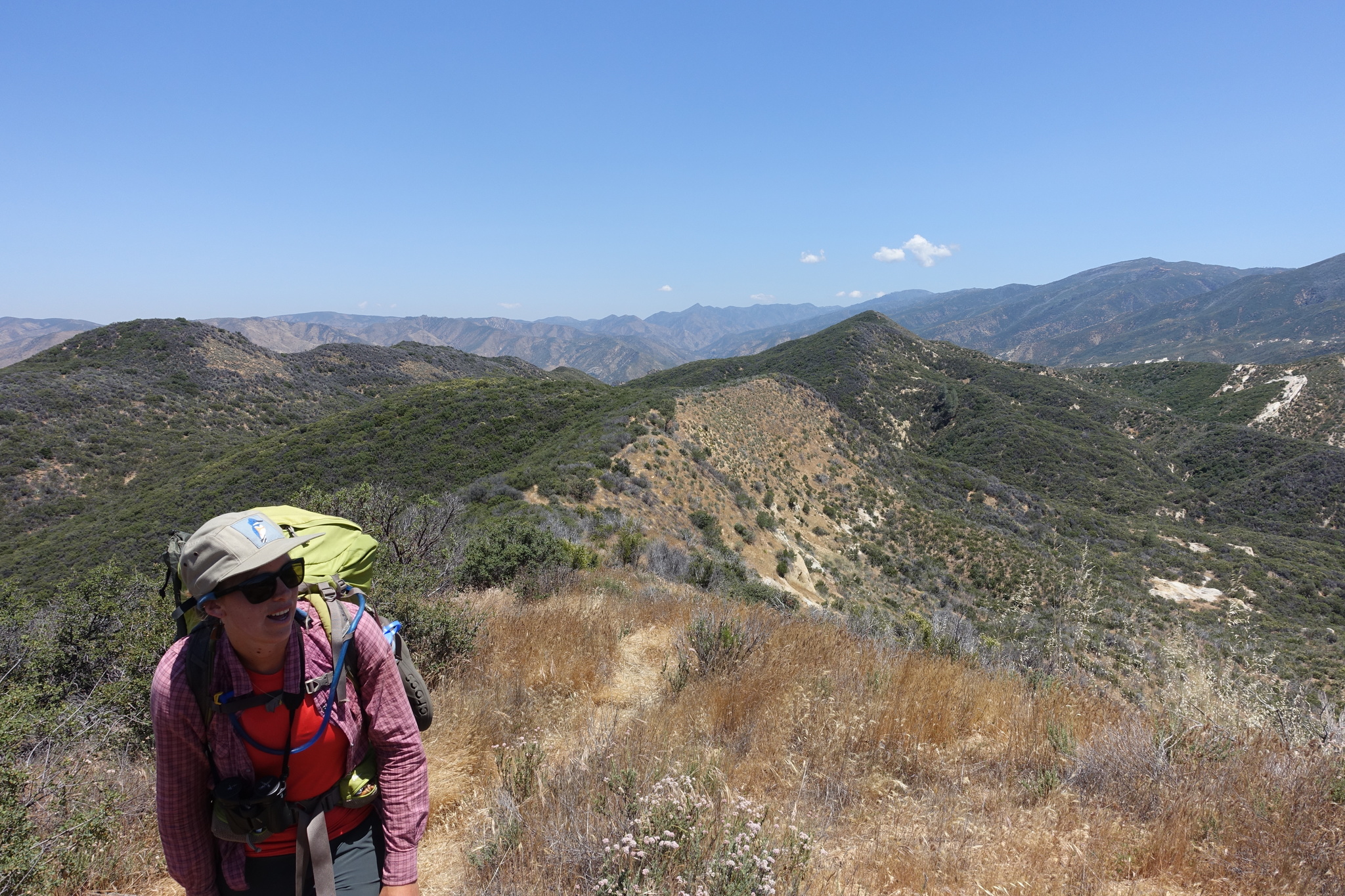 Lost Canyon Trail is can be quite discouraging. Because it is an old roadbed the grade is maddeningly flat. This coupled with the fact that it has several quarter to half mile long switchbacks mean that oftentimes during the descent I could see just twenty to thirty feet below me the trail which I wouldn’t reach for another twenty to thirty minutes. If the trail had been constructed for hikers instead of cars, it would probably be a quarter of the length.

Eventually we did make it to the bottom of the long Lost Canyon Road to Lost Canyon Camp. What we found was a dry overgrown camp with a single spot. Not exactly what we were hoping for after a 15 mile epic day! But probably what we should have expected.

Andrea made the executive decision that since we had hiked so much already anyway, we may as well make the last 4 miles back to Manzana Creek. My feet hurting, I followed. From here the trail follows Lost Canyon creek, which was dry until about a mile below-stream from camp. We talked about ice cream, fantasy novels, and whatever we could to keep our minds off our feet and legs going into our 19th mile of the day.

Eventually we made it back to Manzana Creek just as dark was settling. Luckily there was an open space at the other Lost Canyon Camp, the one at the bottom of the trail. Exhausted, we collapsed on to the bench. 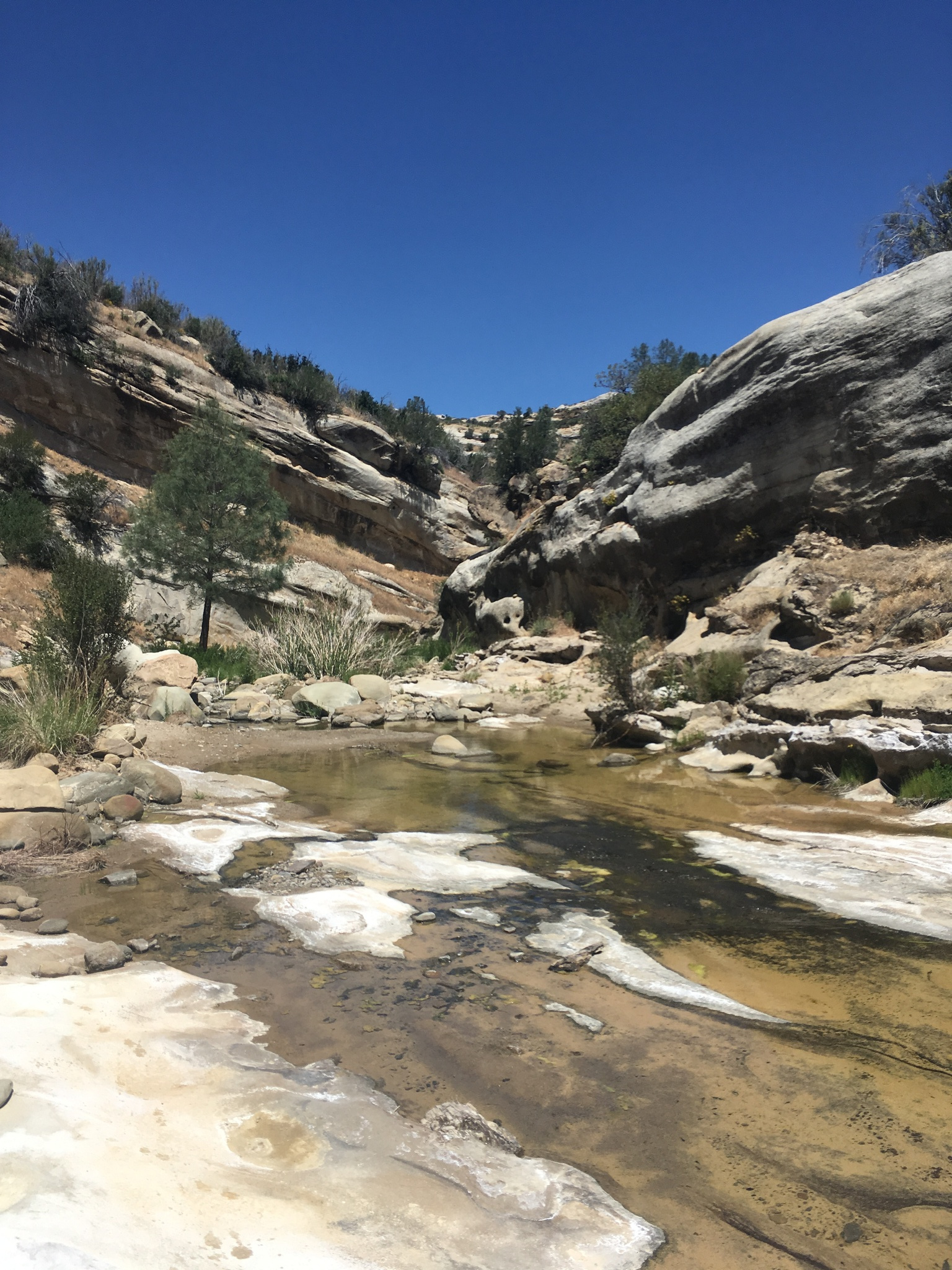 The irony is were only a mile from the car at Nira camp at this point. But since we had carried our packs all day, we were going to spend the night, dammit!

The next day we woke up late and lounged around camp for a few hours, then made the short trip back to Nira.

This loop is fantastic in a lot of ways. Hurricane Deck is unforgettable, Manzana Creek is unbeatable. Lost Canyon Trail not so much. But you could do this same loop in a smarter way we did, in more days and it would probably be one of the best backpacking routes around. I would recommend skipping the 19 mile day.

We’ll be back next spring!