What do You Think About in the Shower? 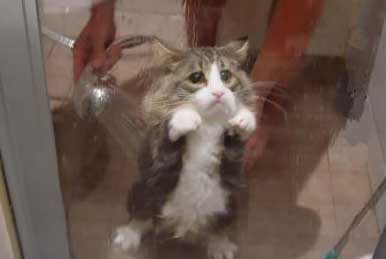 I was sprawled on the floor today, feeling good about my sore legs from the race yesterday, about the fact that I get to stay in Fairfax for a week,  and about the interesting show that was available via Hulu on the Xbox - Nova Science Now. In this program they featured a scientist who discovered the protein called PKMzeta that facilitates electrical communication between the neurons in the brain responsible for long term memory. He also developed an inhibitor, ZIP, which could block those communications and erase memory. Fascinating stuff. In one scene the professor describes his experience going to a sensory deprivation tank, which are small, light-less enclosures that cut off all sound and feeling and are supposed to let your mind run free. He claimed that the tank helped him come up with some profound ideas. Later in the show, he explained how he takes long showers because in they also help him think. Thinking man comes up with his best ideas in the shower! How cliche, right? Ironically, I was thinking about this tonight, in the shower. And then I started to wonder, why is it some common that people come up with grand ideas while in the shower? And then I thought back to Mr. Fenton's experience with the isolation tank. Showers are like isolation chambers - but without the fancy name. The noise of the water is constant and overpowers most other noise, the water is warm and hypnotizing and you are usually in a small space with nothing much to look at. So it's no wonder that people come up with the best ideas in the shower. There is nothing else for your  mind to do. Happy bathing.