Fun and Trickery with the Kippo SSH Honeypot

⌚ 19 Oct 2011 🔖 Linux  Technology
I was recently tasked with setting up a honeypot for an organization that wanted some better insight into who was snooping around in their network. For those of you too lazy to read, what is a honeypot? Well remember in 3rd grade when we made leprechaun traps out of shoeboxes that usually consisted of some elaborate setup to trick the little men into thinking they were getting their hands on a pot 'o gold? Well think of it like that, except with computers. And networks. And hackers, espionage, subterfuge... etc. Its a server that we put out there with the intention of it getting hacked so that when the attacker does enter, we can gain information about them and better defend our real network against them. Basically: 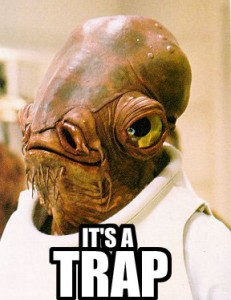 This particular honeypot I was to set up didn't need to be too complicated. Really all we wanted was to be able to listen on SSH and get notified if anyone connected - that's enough because there would be no reason for any of use to ever connect to this server. That's when I found Kippo. Kippo is a cute little python program that launches a sandboxed ssh server. It is semi interactive, meaning that to anyone who connects it would appear (at least for a while) that they have actually connected to a real server. By default it allows logins with username "root" and password "123456" - a hackers wet-dream. What can kippo do once an attacker has connected? 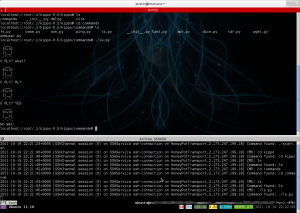 That's me connected to Kippo at the top as if I was an attacker, and then the log files from the actual server below. Good stuff. My only concern with this program is its security. Its a honeypot, but how secure is it? Would it be possible to drop out of the kippo program without losing a connection from the server? Or somehow execute commands from within kippo that can make it out of the sandbox? From what I can tell, it seems pretty secure, but it is hard to tell. Damn funny though. So far I recommend it, and I'm thinking of setting one of these up in amazon open to the world just to see what kind of people wander in. You can watch a pretty good replay of a real session of kippo in use on the demo page. Grab the popcorn.