Your Bike Frame And You

⌚ 01 Feb 2011 🔖 Cycling
It seems every ride I go on lately isn't complete until someone gets into an argument about which material makes the best bike frames.  Face it, we're kinda religious about that stuff. Its almost like defending your major in college or something else equally as meaningless. In any case, I know where my allegiances  lie, but I thought I'd make some insulting generalizations at everyone's expense anyways. [caption id="attachment_448" align="alignright" width="358" caption="Its made of a bunch of straws . er... strands."] 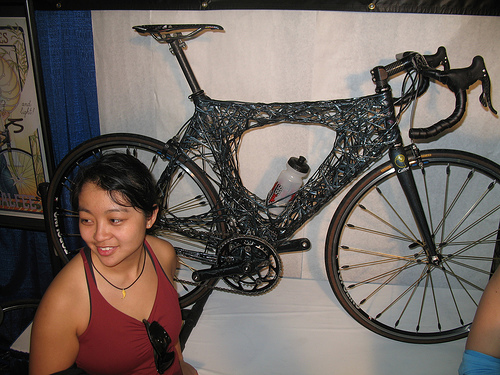 [/caption] PLASTIC Its actually considered glass, ok. Besides, I like to call it carbon. If you want to get really technical, it's actually Carbon fibre-reinforced polymer or CFRP for short. My bike is at the forefront of technology with it's amazing strength to weight ratio and fancy shaped aerodynamic tubing. All us pros are on it, and for good reason. Its the lightest, stiffest most expensive frame material out there. Oh crap, I accidentally laid my bike down on some moss covered rock during a beat-per-minute  break. Whats that? the whole frame is now unrideable? Lame. Good thing I only spent a few grand on it, and this guy can manufacture some more materials to make me another one. (Actually a worker from a carbon plant). 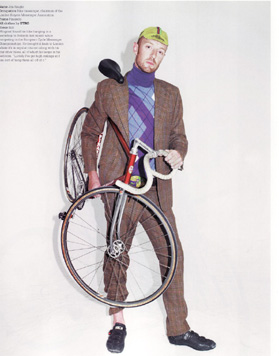 STEEL Steel is real, man. I couldn't imagine riding anything else. Probably because I haven't for the last 50 years... nevermind. Those carbon guys have it all wrong. Steel is the heaviest, mushiest, cheapest frame material on the planet. It has the best ride quality, because in my head I can imagine that the nearly indistinguishable flex of the frame helps absorb bumps in the road or trail. Also, its kinda ironic to buy an expensive new frame made from the oldest bike frame material ever made - which is exactly why mustache toting, kale munching, rayban loving militant recyclers often choose steel as their frame material of choice. ALUMINIUM AL-ew-MIN-ee-əm Hi. My name is Steve. Steve Johnson. I ride aluminum because it is strong, light and relatively inexpensive. Also, they carry it at my local bike store. What can I say about my bike? There are thousands others just like it. I like it. It's got some cool decals on it. Once I was riding and nobody told me that they liked my bike. Actually, thats every ride. Oh well. My good personality makes up for it. WOOD

I've always wanted a wood bike. 100% renewable, clean energy, pedaling machine. Its so green. Good thing my multiple investments in Amazon Lumber, Inc have gotten me to the point where I can finally afford one! Plus it looks hot on top of my Audi! My only complaint is that once I rode it to my local coffee shop to get my daily macchiato and when I came back outside, some punk had burned the thing down to the ground. TITANIUM. I know whats up. Seriously who cares! Just ride the damn thing!