What's the worst thing you've been caught by the cops doing, on your bike?

⌚ 16 Aug 2008 🔖 Entertainment
"What's the worst thing you've been caught by the cops doing, on your bike?" This is the opening post of a thread on pinkbike.com, a mountain bike community site. This thread is EPIC! There are some really great stories to be found within. I'll pull out a few good ones for you, but there are over 30 pages so I wont make it through them all.

"dhrider47 - I was building snow jumps on the sidewalk...haha they really loved that. Then I was riding on a fountain in the middle of town and a cop with short shorts, a terrible police bike helmet, and the biggest P.O.S. of a bike, started screaming at me telling him I make him look bad. In a way I felt bad for him." "pstreethucker - building dirt jumps in the middle of a city park and jumping them, the the police pulled up so we stopped but they got out and told us to keep jumping them, they were bike cops they just wanted to watch.. they called all the other bike cops so about 4 cop cars pulled up and they were all watching us. they didnt even care that we made dirt jumps in the middle of the park

" "bikingrules18 - in canada we dont get it trouble from police, its just like environmentalist retards that tear down everything you build" "cletus44 - Yeah well most park rangers treat you like like you just slept with their wife. (or gay husband) I once fell on a path (don't ask me how) and as I lay bleeding (a bit) on the path a park ranger drives around me and looks pissed because I'm in his way." "berspitze - there is a hill just out of town from my house where they always put one of those speed signs so that if you are speeding it starts flashing. So I decided to ride home and get my road bike, go back to the hill and go as fast as I could. Being that there were no cars in any direction i went for it. I ended up hitting the 41mph mark, in a 25 zone. Once I saw the speed I decided to slow down, but too late. There was a unit parked on a little side road. HE pulled me over and said that I shouldn't be going so fast on my Bicycle and that if he ever caught me doing that again he wouldn't be so rational. The ticked that he wanted to give if I did it again was reckless endangerment."

Here is the full thread: http://www.pinkbike.com/forum/listcomments/?threadid=27486&pagenum=1 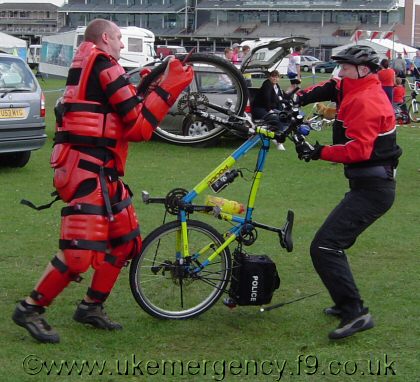