You get what you pay for: The Dollar Tree

⌚ 30 Jul 2008 🔖 News
The Dollar Tree really sucks. The old saying "you get what you pay for" really applies even more so here than anywhere else. I'm not going to go into a huge rant here because Im sure everyone already knows that shopping at this store for anything other than coat hangers (and even those are crappy) is a waste of a dollar. At first you walk in the store and you think 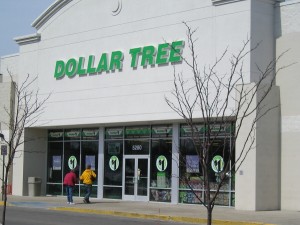 "Wow! How can they afford to sell all this great stuff for only a dollar?" But then you start to realize that the stuff that is on sale is not the same stuff that you buy in other stores but cheaper, its actually not the same stuff at all. In fact, the merchandise at the Dollar Tree is purposely deceiving -  it is made to look like popular brands that are sold in other stores. In fact the merchandise is almost exclusively made in Vietnam, and is of extremely poor quality. As a poor college students that happens to live right across the street from the local Dollar Tree, I have been seduced into buying several products from the place. Here are a few of my real experiences: First of all, NEVER buy food products from the Dollar Tree. Although it may look safe, you really don't know whats in that stuff. Its my personal experience that any kind of chocolate purchased is at least 50% wax. My roomate and I once bought a bag of 100 individually wrapped bubble gums for $1. 1 cent bubble gum? Unheard of since my grandfather's day. Well we quickly found out after reading the ingredient list that one of the chemicals used was banned in several countries including Japan and Sweden. I can't recall the exact name of the substance right now, but if I remember I will post. All food products in the Dollar Tree are so heavily preserved I dont think they even have expiration dates, and if they do, I doubt they are ever checked. I bought some razors. When I tried shaving with them, it hurt a lot and left a big read streak on my face. I opted instead for a rusty used Gillete that had been sitting in my toiletry kit for months instead because it was more comfortable. My girlfriend picked up some mouthwash once. It looked almost exactly like Listerine, except it was called Listerclean or some shit. I tried it and it was tasted like sugar water. There was absolutely no alcohol in it. In fact, I wouldnt be surprised if it did more harm to my teeth than good. Think my ideas on the dollar tree are unfair and unfounded? A quick google search comes up with loads of stories that condemn the Dollar Tree of its crappiness: Glue Guns Recalled by Dollar Tree Stores Due to Fire, Burn and Shock Hazards Incidents/Injuries: Dollar Tree is aware of seven incidents in which these glue guns short circuited resulting in two injuries, including electrical shock and burns. http://www.cpsc.gov/cpscpub/prerel/prhtml08/08175.html I guess thats one way to make arts and crafts a little exciting. Dollar Tree Plush Insect Toys Recalled Dollar Tree is recalling about 300,000 plush insect toys.They contain small parts, posing a choking hazard to small children. http://www.consumeraffairs.com/recalls04/2008/dollartree_insect.html Choking hazard to children? Thats too far.

False information is ok if it only costs $1 right???

Dollar Tree to remove toys with magnets from stores "...rare-earth magnets -- which are made of strong natural materials, as a "banned hazardous product" when used in children's toys." http://www.chicagotribune.com/business/chi-thu_magnet_0816aug16,0,1950083.story Looks like Dollar Tree really has it out for the kids.

"Colgate said the fake toothpaste may contain diethylene glycol, which the company never uses in its toothpaste... The fake toothpaste has been found in discount stores in New York, New Jersey, Pennsylvania and Maryland, the company said." "The chemical, also known as DEG and sometimes illegally used as an inexpensive sweetener and thickening agent, is commonly found in solvents and antifreeze."

Dollar Tree Jewelry Recalled for Lead Poisoning Hazard "The recalled jewelry contains high levels of lead, posing a serious risk of lead poisoning and adverse health effects to young children." http://www.consumeraffairs.com/recalls04/2006/dollar_tree_jewelry.html Maybe its better to keep your kids out of the Dollar Tree period. If you think your health and well being is worth more than a dollar, don't shop at the dollar tree. If you love buying crap you dont need just because its cheap, go right ahead.