How to Boost Wifi Signal With Tinfoil and Paper.

⌚ 20 Jul 2008 🔖 Technology
Just like any other good nerd, I started on a new project a few days ago. I wanted to put an old computer in with the house's stereo equipment to act as a jukebox. I've mentioned the idea before in an earlier post. Now I actually wanted to put it to practice. I set up all the software easy enough - I installed Linux, MPD plus a  webclient and a samba share. In theory, it was working... however once the ethernet cable was unplugged and the box put in the closet with only an ethernet adapter, things got ugly. I plugged in the power and booted up the computer. To my dismay, the box did not pick up any wifi signal. Not even a trace. The computer was sitting in a complete dead zone. To be honest, I was not surprised. The signal had to travel up a floor, to the opposite side of the house, through a kitchen. Kitchens are notoriously bad for wifi, all the equipment tends to block the RF waves. So I did some research on the net. What could I do to increase my routers power and thus give life to my new jukebox? Thats when this link, like an angel out of heaven, found its way to my eyes. The EZ 12 from freeantennas.com Its a template for a parabola you can attach to your wireless rotuer's antennas. All you have to do is cut out the template, resize it to your liking, glue on some tinfoil and attach it. I made one for each antenna and it only took me about 10 minutes. The thing worked much better than I would have ever thought! All of a sudden my jukebox could pick up signal, not that great, but better than nothing. I also noticed that the signal strength in my room with my laptop went from 80% to 95% +. [caption id="attachment_135" align="aligncenter" width="300" caption="My D-Link router with the windsurfers attached."] 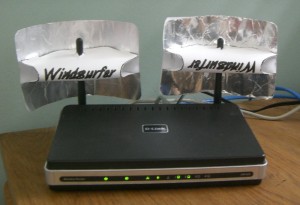 [/caption] The windsurfers work by focusing all of the RF waves in one direction, instead of all directions like the antennas without them. If you are anywhere in front of the direction of the router, you will see a significant increase in signal. From behind, not so much. The directions on the site say that you need to use thick paper, but I found that regular printer paper works just fine. After you insert the tabs into the reflector, just bend the tabs up and use a piece of scotch tape to hold them there. Bigger is better, so I edited the image to a size thats big enough to just barely fit on a piece of printer paper: [caption id="attachment_136" align="aligncenter" width="414" caption="The Windsurfer Template (click for fullsize)"] 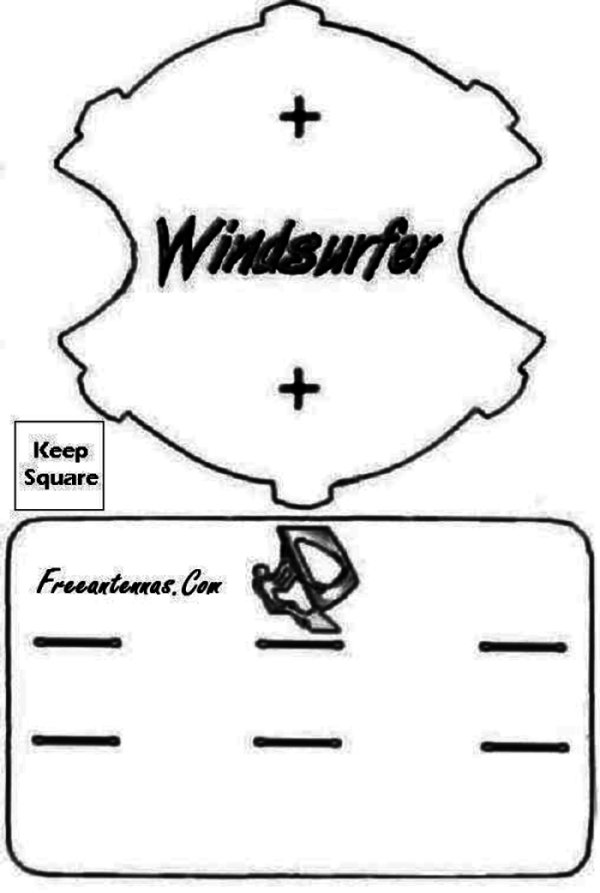 [/caption] Enjoy the increased signal! I know I am.