Robots That Will Own You

⌚ 06 May 2008 🔖 Science  Technology
We all know that its not a question of if we will be replaced by robots, but when. After looking at a few of these machines, the day may be closer than anyone thought. Boston Dynamic's Big Dog 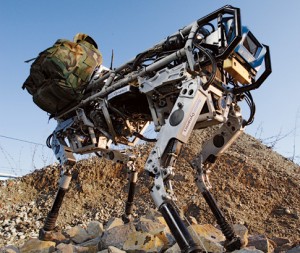 From Boston Dynamic's web site: "BigDog is the alpha male of the Boston Dynamics family of robots. It is a quadruped robot that walks, runs, and climbs on rough terrain and carries heavy loads. BigDog is powered by a gasoline engine that drives a hydraulic actuation system. BigDog's legs are articulated like an animal’s, and have compliant elements that absorb shock and recycle energy from one step to the next. BigDog is the size of a large dog or small mule, measuring 1 meter long, 0.7 meters tall and 75 kg weight." This thing is as creepy as it is cool. It seems unreal that a machine could exist that appears so lifelike. The only way to really see how impressive it is would be to watch the video. It recovers after being kicked, slips on ice but never falls over, and walks over a pile of bricks. The amount of work put into this dog must be staggering. Check it out:

This robotic exoskeleton designed by Sarcos gives the wearer superhuman strength. Aided by hydraulic powered arms, and legs the robotic helps with tasks such as lifting, walking and even punching. Sarcos says that later versions will include protective armor that will cover the body, and versions that become autonomous once stepped out of. 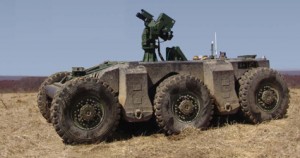 Another one of DARPA's research projects. The "Crusher" is one helluva vehicle that can handle a wide variety of terrain. The machine can be remote controlled or drive itself autonomously. the thing already has a machine gun mounted on top - it will have obvious uses for the military. 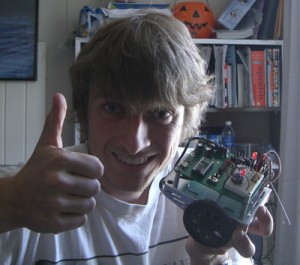 Sure, he doesn't look like much now, but he'll soon be taking over the world and hes only going to answer to one man - me. Start sending in checks for protection now and you will be spared.