⌚ 18 May 2008 🔖 Science
The concept of geologic time may be hard for some people to grasp. Our perspective of time is squeezed into minutes, days and years. By contrast, geologic time is based on thousands, millions and even billions of years. If you were able to count one number every second of your living life, you would have to live 147 years just to count to 4.6 billion, the approximate age of the earth. Its important to realize that in such a huge amount of time, the earth didn't always look the way it does today. Most people are probably familiar with the super continent Pangea that existed ~250 million years ago. well it turns out that Pangea was only one of many super continents that have existed in Earth's history. The earth's tectonic plates are in a constant state of motion, thus the earth is constantly changing. So it would make sense that what was a beach a long time ago can now be miles from the ocean. Some of the most interesting places to find marine fossils are in Montana, in the middle of the USA! In the case of 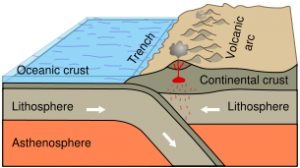 fossils found near I-5 in Oregon, we can get a little more specific. The Hornbrook Formation where we found the fossils were not originally part of the North American Plate but instead formed as an island arc chain on the Pacific Plate. As subduction occurred on the boundary of the two plates, the Hornbrook formation slowly moved towards the coast of Oregon where it eventually collided with the North American plate and became a part of it. This process is called accretion. Think of the earth as a giant pot of soup. If you don't stir soup, stuff starts to collect on top. The longer you leave it, the more other parts of the soup attach the the conglomerate in the middle. That "stuff" is like continental crust. In fact, Oregon's coast is made up of many different accreted materials. If The Hornbrook Formation was once an island chain, you would expect to find marine fossils contained within it. There are several other ways that fossils may come to exit far from the present day ocean. In the past sea levels may have been higher then they are now, allowing inundation of the coast and creating beaches farther inland. Valleys could become shallow sea ways, where you would also expect to find marine fossils. Always keep your eyes open for fossils, you might find them where you would least expect.