Look at that Blue Jay, isn’t he cute? They are so beautiful, and so are their songs! I wonder what he had for lunch, probably some berries or something. Such wonderful little creatures. 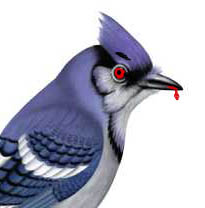 Little does my grandma know, as she watches the birds fly and sing out her window, that Blue Jays actually readily kill and eat other song birds.

I didn’t know either, until today. I was sitting in the Cascade Dining Hall enjoying my breakfast looking out the window, when I saw a Blue Jay eating something in a tree. As I looked closer, I realized that it was another bird! I rushed outside to try to get a video. Just as I started to film, the bird saw me and flew away with the carcass, dropping the decapitated head at my feet. You can view the pretty graphic picture here.

What a way to start the morning! Since I had never even heard of this before, I decided to do some research. The Blue Jay (Cyanocitta cristata) is actually a member of the Crow (Corvidae) family. All crows eat meat, some more than others. Although Blue Jays eat about 3 times as much plant matter as it does meat, a large part of their diet is made up of other animals such as mice, fish, bats and other small birds. All members of the crow family are know for their intelligence, thats why its so hard for Fluffy to kill them. You can read more about the Corvidae family on this fascinating website: http://science.jrank.org/pages/1886/Crows-Jays.html

Still don’t believe me? Check out this youtube video, the guy had better luck filming it than I did: