A Show That Makes G4 Not Suck.

⌚ 07 Apr 2008 🔖 Entertainment
G4, the television network for gamers, really sucks. Unlike other networks such as Oxygen and Fox that suck because they always have and always will be horrible TV networks, G4 is an even worse kind of suck. G4 is the worst because of what is was, what is is, and what it could be. 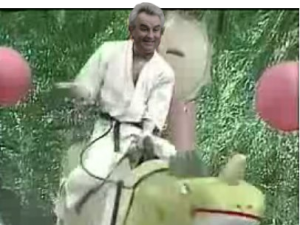 In a not so distant past, G4 was known as Tech TV and it had good programming and personalities. I used to watch shows like The Screen Savers and Call For Help every day. People like Leo Laporte and Martin Sargent made these shows interesting and entertaining to watch. But then, for some reason, something changed. The good shows were replaced by horribly amateurish, graphically overloaded, juvenile talk shows that focused more on the hostess's breasts than actual content. Everything became about video games and stupid internet videos. Most of the old talent moved to other internet networks like Revision3 and Twit.tv where they still create good shows to this day. By far, the worst part about G4 is the countless hours of shitty syndicated Japanese game shows the network uses to fill airtime because they have nothing else to play. Now, asking G4 to replace shows like Ninja Warrior and Unbeatable Banzuke with good programming is out of the question, because we know they can't. However, we could ask them if they are going to be playing these shows, to at least get a little creative with them. Make them hold attention for more than 3 minutes. The perfect solution: 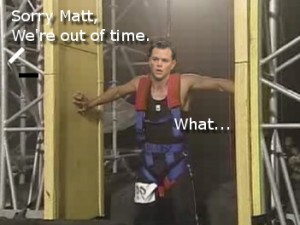 Imagine a show that builds on both Japanese game shows and Celebrity Death Match's success. Celebrities take place of the regular people in these ridiculous challenges and you have yourself a winning formula. Leo Laporte would rock on the bucking bull, and Paris Hilton would be a blast to watch trying to make it up the impossible wall. And there would never be enough time for Matt Damon. I guarantee that G4's ratings would skyrocket, and it would replenish some hope in the network that so many of us have lost. Now the only obstacle is to get celebrities to want to participate, but that shouldn't be too hard. Who wouldn't want to compete in a challenge where you run away from boulders and get fire extinguishers sprayed in your face? I know I would.