I decided to craft some clickbait. What happened next will shock and disgust you

As evidenced by this website, every once and a while I’ll write something. Although my regular readership approaches nil when you take my mother, google bot, and myself out of the running I’ll still post a link to facebook and see if I can get some clicks. Usually I’ll get 10-20 visits (thanks guys!) and I’ll leave it at that.

Yesterday I was scrolling down my facebook news feed (something I try not to do anymore) and realized my feed was filled nearly completely with crap headlines like this:

“The 9 Most Epic Texting Pranks Of All Time. The 3rd One Killed Me…LOL!”

“Obama Just Did What No Other President Before Him Has Done”

The first post is just dumb. That person is no longer on my friends list. The other two headlines could be about something important, but what’s up with the baity headlines? Just say what Obama did. Judging by the image they used he was the first president to order the extra spicey schezuan shrimp.

I wondered if I could play the game that sites like Buzzfeed, Upworthy and the Huffington Post have become so good at. And the result was this: 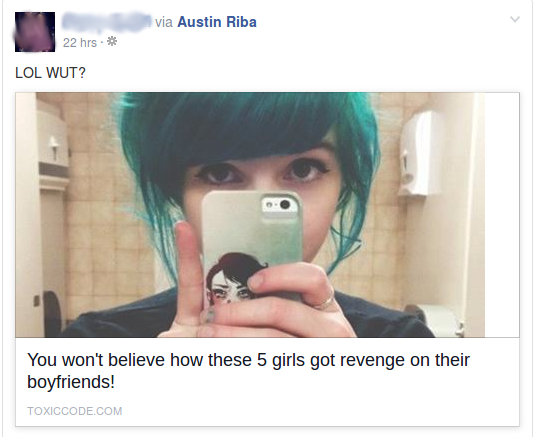 However, the link actually pointed to this page. I considered it a PSA, and thought I’d probably get the same amount of clicks that I usually do for a blog article I post.

As of now, the page is up to 350 views. Thats 10x more than a “good article” I write ever gets. I didn’t even know I knew so many people that would click on something so obviously terrible. Yet there it is, in plain, cold truth.

Appealing to the lowest common denominator obviously works. Once I somehow regain my faith in humanity, I’ll think about possibly taking advantage of this fact.